Understanding the Importance of Network Mapping

Not too long ago, networks were much simpler than they are today. Even large organizations relied on networks that could be manually documented without too much effort. Today, things are very different. The rapid growth of information and communication technology has caused networks to explode in size and complexity, making it very difficult for network administrators to create network maps, which make large networks more comprehensible by providing a broad overview and documenting individual network nodes.

To the uneducated, network mapping may seem like one of those tasks with which managers burden IT departments as if to satisfy their endless urge to enforce their own ideas of what IT departments should be doing.

In reality, network mapping is absolutely essential for achieving both business and IT objectives. Its goal is to visualize the complete network infrastructure, identifying network devices such as switches, routers, firewalls, servers, and software applications.

Only when an organization has up-to-date information about its existing network resources, their condition, and availability can it make truly informed decisions and position itself to remain competitive in the future. There have been many organizations in the past that relied on inaccurate information about their network resources when making important decisions, causing them to misjudge their capabilities and spiral into irrelevance.

Considering the steep rise of the cloud and the increasing reliance of organizations on hybrid infrastructures, it’s safe to say that network mapping has already become essential.

Cybercriminals have long realized that small and medium-sized organizations are the easiest targets, which means that it’s not just large enterprises that need to keep their resources tightly organized and under control. The emergence of shadow IT threatens literary everyone—from mom and pop stores with just a couple of employees accessing the internet on their mobile phones to multinational corporations with thousands of employees spread around the world.

Network maps help spot any network problems at-a-glimpse, making it possible to quickly identify the problematic device and remove it from the network to resume its normal operation. Non-technical managers and other decision-makers appreciate network maps because they help them understand complex technical issues before signing off on network upgrades. This, in turn, makes IT departments happier because it eases the process of budget approval.

One network mapping software solution that meets these and many other requirements with flying colors is Network Inventory Advisor. This professional yet easy-to-use network inventory software can automatically collect all relevant data on network devices and provide detailed OS and devices statistics. 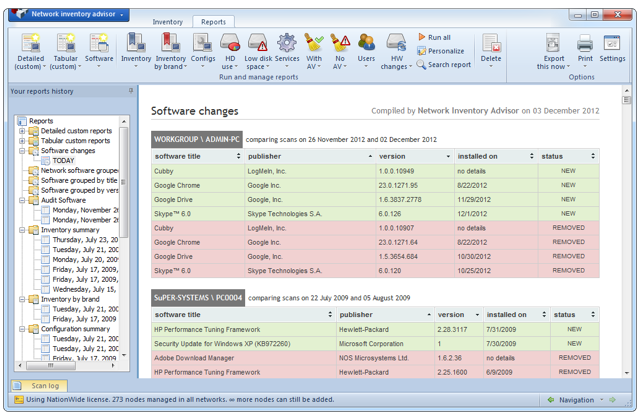 Because Network Inventory Advisor can additionally aggregate licenses for most major software products from more than 500 vendors, including Microsoft, Corel, Symantec, and Adobe, just to name a few, it can help prepare for audits and achieve compliance with stringent regulations. With each and every scan, Network Inventory Advisor tracks hardware and software changes. When it detects a change, it can send a notification to network administrators, informing them that something has been removed, installed, or replaced. 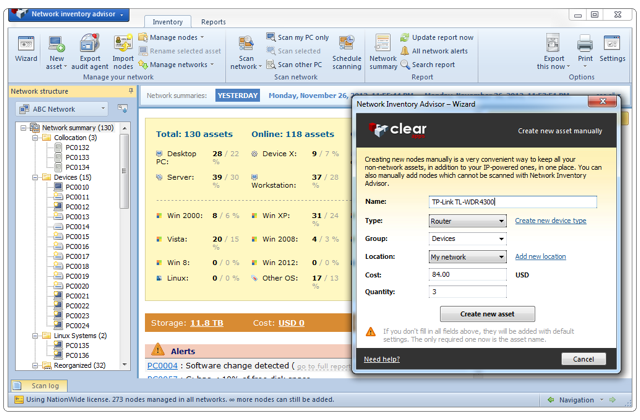 Network administrators can then take advantage of the powerful reporting features of Network Inventory Advisor and use them to build a report with all the changes that happened since the last scan. Reports can be saved into CSV (for Excel), SQL (for MS Access, MS SQL, MySQL or other DB engines), HTML, PDF, XML, or an internal format.

Network Inventory Advisor is easy to recommend because it offers professional features in a very appealing package and at prices, even non-profit organizations can afford. Network Inventory Advisor can automatically collect all relevant data on network devices, and it can turn the gathered data into comprehensive reports. It’s automatic reporting capabilities instantly alert network administrators of changes, helping them identify and solve problems in a timely manner.

What Is SNMP Network Discovery? 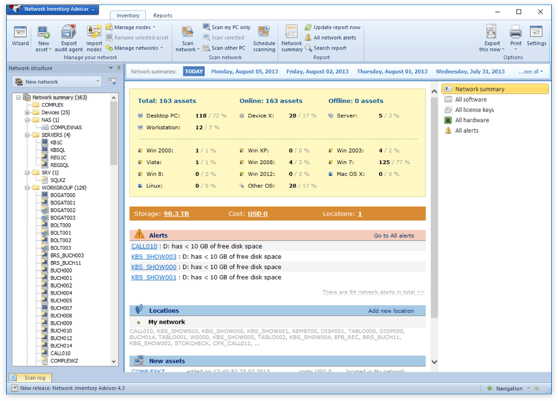